Before you venture into any sports, it is best to have an idea of the sport to enable you to understand and learn faster. Read on to know more about bouldering for beginners.

Bouldering, which dates as far back as the late 19th century, cemented into the heart of rock climbing, thanks to the enthusiastic exploits of bouldering advocates.

Such as Oscar Eckenstein, the famed inventor of the modern crampon, and John Gill, the esteemed mathematician, and rock climber. John Gill is widely known as the father of modern-day bouldering.

Bouldering, which is generally considered to be climbing at its simplest form, requires the right gear for safe and effective climbing.

While bouldering requires small gear compared to other rock climbing forms, it’s essential for the necessary gear to be top quality and in a good state. Some of the gear required in bouldering for beginners are;

One of the essential gear in rock climbing, the shoe, which acts as an interface between a climber and the rock. But in this case, the bouldering problem should be designed for bouldering.

The size should be fitting, and the features should be one that suits the bouldering route. All should be appropriate for the boulder route from the velcro straps or laces to the sole material, as it’ll have an overall effect on the climber’s performance.

While Bouldering may be safe, with minimal risk of severe fractures and injuries from long-distance falls, it’s still appropriate for a climbing helmet to be worn.

In line with safety precautions, the helmet should have a thick shell and durable straps.

Every bouldering route comes with a crash pad, which provides a smooth landing for falls. But for climbers thrilled by the idea of outdoor bouldering, a dense crash pad must be part of your climbing gear.

A must-have climbing gear, chalk is used in every climbing discipline. While climbing, there’s bound to be sweat in your hands, which presents difficulty when climbing.

Chalk keeps your hands dry, thus preventing sweat. It can be attached to your climbing belt as you climb your route.

As with climbing any climbing route, there are basics steps to be adopted to ensure an enjoyable and safe climbing experience. Highlighted in this section are a few of these basics required in bouldering for beginners.

See the bouldering tips for beginners’ article for an in-depth explanation of these basics.

A vital part of the preparation for climbing in every form of climbing is the warming up routine. This step is particularly crucial for beginner climbers as the smallest injury can disrupt what would have been an enjoyable climbing experience.

For bouldering, despite how safe it is, it’s the same. Climbers can warm up by engaging in exercise routines such as push-ups and stretching. This is effective as stiff muscles and tendons become active.

After warming up, a climber must cool his body temperature. This is important as it brings the heart rate and breathing rate down and also relaxes the muscles.

It’s important to note that much energy shouldn’t be out into the warming up routine, as needed for the climb.

As a newbie in bouldering, you most likely would not be familiar with the bouldering route. In comparison, your first climb would be challenging as you navigate the boulder problems, observing other climbers before climbing would do you a great deal of good, as it’ll make your climb easier.

For your first boulder climb, it’s essential you follow the leader, not observe, follow the lead of an advanced climber, especially for bouldering climb with difficult grades.

This will help you navigate the boulder problems and reduce the risk of injuries.

Engaging in an activity without accomplishing tangible results can seem futile and frustrating. This is probably how you would feel after your first few bouldering climb.

Do not be overwhelmed by these negative emotions, but rather progress slowly. It’s advisable for a beginner that your goal should be how far you climb than reaching the bouldering route’s peak.

Patiently learn the techniques and steps in navigating challenging bouldering routes. This will hasten your learning process.

This should most be embedded deep in every climber’s mind, especially outdoor climbers. For outdoor bouldering, safety should be prioritized above speed.

Each climber action could negatively impact other climbers, so climbers must adopt safe climbing routines, by spreading across the climbing route.

You’ll likely sustain injuries from great distance fall for indoor bouldering, as safety mats cover the entire climbing route. But injuries can still be upheld if climbers fall on each other or equipment.

A climber should not climb directly under other climbers. Crash pads should also be free from equipment and climbing gear.

As you master bouldering’s basics, you must be equally aware of the various bouldering nature grades as a beginner. Such awareness will enable you to be conscious of the level of difficulty when climbing a bouldering route.

It also can be instrumental in keeping a tab on your bouldering skill progress, as the easier, you climb more difficult bouldering routes, the better your skill becomes. There exist five bouldering grades system, which is listed below.

According to Rock Climbing Central, find below the correlation between the three most popular scales to each other. 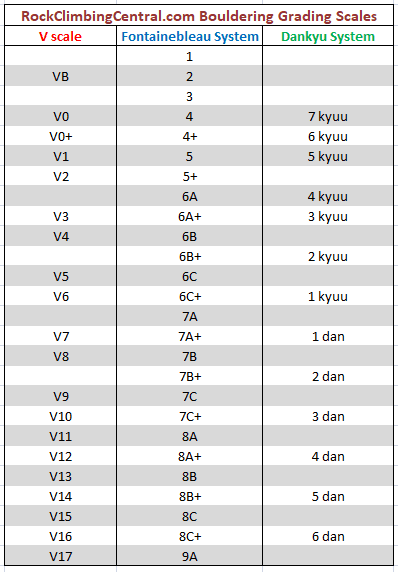 Since rock climbing became wildly accepted as a sport and an exhilarating, adventurous activity, it has seen tremendous growth. This growth has extended to every discipline of the sport.

This growth has also translated in terms of millions who engage in climbing annually, and it has specifically benefited bouldering.

This comes as no surprise as bouldering is often the first discipline of rock climbing beginners in the sports venture, thanks to how safe its ranks.